The best bars and restaurants in Havana and Trinidad, Cuba – according to local B&B owners

The best bars and restaurants in Havana and Trinidad, Cuba – according to local B&B owners

Airbnb recently arrived in Cuba … and who better to give local tips than the owners of the homes where photographer Matt Humphrey and writer Ben Gallacher stayed? 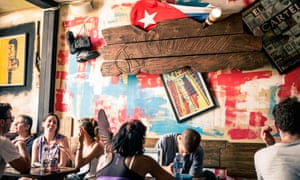 Cubans have long been in the habit of welcoming guests into their homes, and since 1997 one of the successes of the Revolución has been the casa particular (the equivalent of the B&B). As relations with the US continue to thaw (embassies reopened in the respective capitals last month after 50 years), Airbnb launched in Cuba in April, becoming one of the first US businesses to do so. It already has over 2,000 listings – though a continuing trade embargo means you can only book in advance from the US. Staying with a private host is a great way to get beneath a country's skin and find out about where locals eat, drink and have fun. On a recent trip, with stays at five people's homes, we asked our hosts for the lowdown on their neighbourhoods.
Casa Caracol, Old Havana
Julio Hernandez 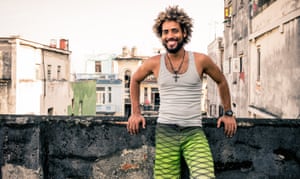 We were the second-ever guests at Casa Caracol, host Julio Hernandez having signed up with Airbnb just days before. A typical Spanish colonial property, Casa Caracol has one street-facing living area with three bedrooms leading off the central courtyard. Julio was proud of his improvised power shower – a bit of a novelty luxury item in Havana. The place is clean and ideally placed for exploring old Havana, two blocks from the Capitolio (the government building) and an easy walk to the port.
• Rooms sleeping 4 from 34CUC (about £22), breakfast £2.60. Calle Cristo #40 between Teniente Rey and Muralla. Can be booked from a US internet address at airbnb.co.uk/rooms/5890631, or by phone on +53 5 390 3416
Havana city guide: what to see plus the best new bars, restaurants and hotels
Read more

Where Julio sent us
Emerging from the economic and physical ruins of Old Havana, Bar El Dandy, (Plaza de Cristo, bareldandy.com) is leased by the state, funded by Swedish money, but run and managed by Cubans, including the women behind the bar. The menu, the art on the walls, the casual stack of vinyl, is all perfectly stage-managed for a western audience. Breakfast isn't much of a thing in Havana, so the offering of coffee, eggs, fruit salad and baguettes is unusual in the city (£5).

All the staff at El Chanchullero, (Bernaza y Cristo, el-chanchullero.com) wear "Hemingway did NOT drink here" T-shirts – refreshing irony in a tourist-driven city. The bar has been around for five years and you get a sense that its owners know their audience pretty well. The decor sees revolutionary slogans and posters on distressed painted walls, the menu is full of appetising, affordable tapas (the pimientos de padrón pack a punch) and the music is contemporary – this was pretty much the only place we didn't hear Buena Vista Social Club's Chan Chan over and over again. Early evening sees the place packed with Cubans and young tourists, eagerly taking advantage of cheap, strong cocktails (caipirinhas and mojitos about £1.30). It's easy to lose a few hours wedged into an intimate booth, watching the chaos of Old Havana unfold through the open door. 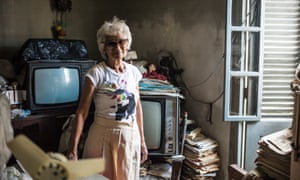 Raquel, manager of Casa Julio (an associated house of Hostal Peregrino), central Havana, pictured in her own home.

As Havana's hotels become overloaded so, then, do the smaller hostels. The popular Hostal Peregrino (doubles from £26, breakfast £3, hostalperegrino.com) is no exception and, being full, the owners Elsa and Julio Roque booked us into one of their casas particulares.

At Casa Julio, Raquel, who calls herself "manager/caretaker/cleaner/slave" is friendly and attentive with the manner of a provincial B&B owner, providing complicated explanations of how to open doors and what fan setting was best. Central Havana, between Vedado and Old Havana, is a poor part of town where tourists rarely venture and the apartment is pretty basic, a bit like staying in your gran's flat. But it's cheap. The whole place – two bedrooms, kitchen, living room, two balconies – costs only £19 a night.
• Consulado #152, between Colon and Trocadero. Book on +537 860 1257, hostalperegrino@gmail.com

Where Raquel sent us
Hidden down a backstreet in Old Havana, La Familia, (San Juan de Dios #65 altos e/ Habana y Compostela, +53 7 863 4502) is a popular paladar (privately owned restaurant). After negotiating three flights of steep stairs, an incongruous series of fish tanks and a deserted cloakroom (who wears a coat in Cuba?), you emerge on to a beautiful roof terrace. It's a small place with about six tables, and live music nightly. It's not cheap but portions (in typical Cuban fashion) are huge – expect plantain, rice and beans, salad, yukka and fruit as accompaniments to your chosen dish. The mixed seafood platter was delicious, but pricey at about £16. Booking is recommended.
La Guarida restaurant 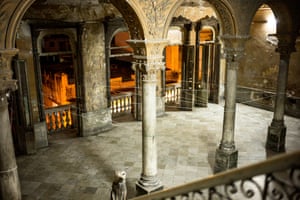 A space at La Guarida restaurant.

La Guarida, (418 Concordia, +53 7 8669047) looks like a set from pre-revolution Havana. The crumbling grand staircase leads you up two floors of large, high-ceilinged rooms. In a corner a mother may be rocking a baby to sleep, white sheets hanging on the line. And then you step into the opulence of La Guarida restaurant. It's been a Havana fixture for over 75 years and there's a sure-footedness in the set-up – elegantly uniformed waitresses and ornate washrooms for a start. You can order with confidence: the food at La Guarida is of high quality. The varied menu is reasonably priced: mains of tenderloin, lobster, lamb tikka masala, along with the excellent Cuban speciality of suckling pig, cost around £10. It's a popular place, with queues of visiting tourists spilling out down the corridors. 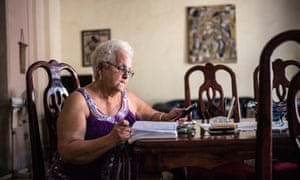 This lovely colonial house on bustling Calle O'Reilly ticks many boxes for a fuss-free central Cuban homestay. Hostess Mercedes Valenciaga Sanz is old school in her style and manners – and makes you feel at home immediately in her nicely furnished, cool home. Rooms are clean and spacious and Mercedes has her finger on the pulse for places to eat, visit and explore.
• Doubles from £19 B&B, O'Reilly #506 between Villegas and Monserrate. casamercedes.awardspace.com. Book on +537 863 4493, jormer506@gmail.com 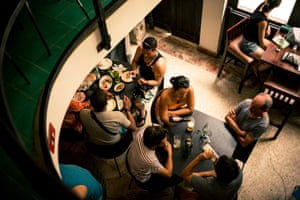 Ornately framed mirrors and chalkboards adorn the exposed brickwork walls in O'Reilly 304 (e/ Habana y Aguiar, +53 5 2644725), a friendly and welcoming Barcelona-style tapas bar. Its food is amazing. The ceviche was a particular highlight. Given the scarcity of certain ingredients in Cuba, the assembly of white fish, onions, coriander, lime, white beans, chilli and garlic is a feat of acquisition as well as culinary excellence (only £2.50).
Casa El Tulipan, Trinidad
Mara and Bernardo, who run Casa El Tulipan, Trinidad, Cuba. 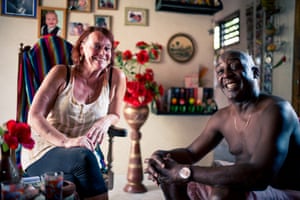 One of the best ways to find a casa particular when you are out and about, and don't necessarily have a reliable internet connection, is to use the Cuba Junky app, which lists a huge variety of casas all over Cuba by geographical area (make sure you download content before you leave).

Top of the list in Trinidad is Casa El Tulipan. You have to walk an extra few blocks in searing heat, but are rewarded by an even warmer welcome from owners Bernardo and Mara. The two-bedroom rooftop apartment is in a quiet residential area. Ascend the spiralling stone staircase and step on to a beautiful terrace boasting shaded views across Trinidad. Being Dutch, Mara Gonzalez-Martinez speaks perfect English, and having lived in Trinidad for many years is a good source of recommendations.
• Room from £22 B&B. Antonio Cardenas (Reforma) #511 between S. Bolivar (Desengaño) and Stgo. Escobar. Book on the Cuba Junky app/website cuba-junky.com, or +53 52711807, +53 5 271 1807, eltulipan511@yahoo.com 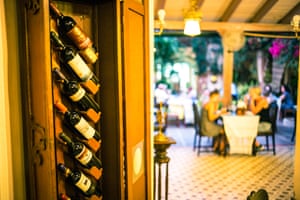 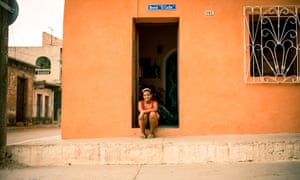 If you can't get into Casa El Tulipan, you can't go wrong with Casa El Caribe run by Mara's best friend, Ada Silva. It's more centrally located, and the set-up is similar in that you can get the top floor all to yourself. The balcony is a prime people-watching spot and particularly well-positioned for the early morning bread man and his cry of pan suave (soft bread).
Advertisement

Casa El Caribe is a family operation, with grandson Maykel providing the breakfast, granddaughter Nicola imparting local knowledge and grandmother Ada the heart and soul of your stay. The two-bedroom, two-balcony apartment has its own private entrance and power shower. What isn't listed is the amazing access that staying with Ada gives you. She knows everyone! We met neighbours, cousins, aunties and felt part of this warm, friendly community.
• Doubles from £16, Antonio Guiteras #151, between Frank Pais and Pedro Zerquera. Book on cubajunky.com, or +53 5 337 6903

Where Ada sent us
Open mic nights don't usually do it for me but in the open courtyard at the rear of the Casa de la Trova (off the main square, Fernando Echerri 29) highly talented musicians sing local songs with verve and sensitivity. Tables and white plastic chairs spill forward from the ivy-clad walls, underneath an evening sky thick with cigar smoke. It is a place where people congregate to share stories, a bottle of rum, a joke, a kiss … it feels like we've gatecrashed a town reunion or an uncle's birthday.
La Chanchanchara Bar, Trinidad. 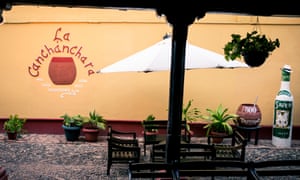 Whether it is for a quick one or two to get your night going, or a final destination after you've exhausted local music venues, Taberna la Canchánchara (Calle Real del Jigue 90) is the perfect place to savour a Trinidadian speciality, a canchánchara cocktail (rum, honey, lemon and water), served in a small ceramic cup (£2). The place is heaving with musicians after the surrounding bars have closed, so you may be in for a lock-in. It has a nice setting in the colonial-style courtyard and outhouse of a 400-year-old property.

Matt Humphrey's photography can be viewed at instagram.com/matthumphreyimages"

Posted by Libertad at 5:23 AM No comments: