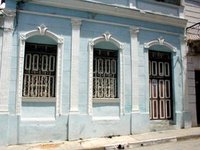 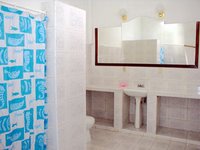 The "casa" of Rolando and Laudelina is a great colonial house built in 1900.
It has retained it's original colonial features like the layout of the house, the high ceilings and the original woodwork.

The 2 rooms for rent both have:
- private bathrooms with hot and cold water 24/24
- two beds (double + single)
- air conditioning
- fans.

The rooms are rented for Peso Convertible 20 per night per room.
(or its equivalent in freely exchangeable foreign Currency like Euro, Can. Dollar, ...)

The house also has a nice living room, a large kitchen, a dining room and a central patio (colonial).
The central patio upon which the rooms open is a great and cool place (shaded with large fans) to relax after a walk through the nearby city centre.
The casa is located behind the "teatro Oriente" at about 400m from the main square.
Close to the "Parque Cespedes", the cathedral, the Casa Granda hotel and the "Casa de Trova".
On or near the Parque Cespedes you will find three cyber cafés.
You are only 200m from the "Casa de la Musica" and 100m from the main shopping street in Santiago (shops, banks, ...)
Posted by Libertad at 3:44 AM No comments: 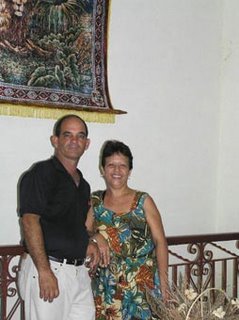 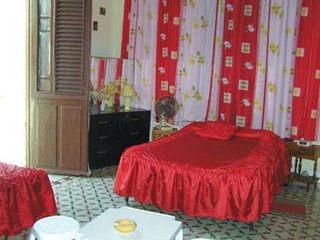 Miguel and Noeli invite you to their casa particular (bed and breakfast) in the center of Santa Clara (Cuba).
Casa particular Miguel and Noeli is the only casa particular in Santa Clara that has a view of the Parque Vidal, the most important square of the city of Santa Clara. The casa particular offers a great room with two beds, air conditioning and a private bathroom. The room comes equipped with a refrigerator and lots of storage space.
The guests can also use of the living room, the balcony, the dining room and the kitchen. The house offers breakfast, lunch and supper. The prices: 3 CUC for breakfast and about 5 CUC the lunch or dinner (it depends on what you want to eat).
The food is basically Creole and abundant, even vegetarian plates can be served.
The price for the room per night is of 20 CUC in the high season and 15 CUC in the low season.
Posted by Libertad at 3:32 AM 1 comment:

Along the main street of Vinales, a small town that is a major tourism center in western Cuba’s spectacular tobacco country, 33 of the 107 houses display signs that show they are licensed to lodge foreign visitors. Locals say there are about 300 private home rentals; if accurate, the private rentals outnumber the 173 rooms in the area’s three state-owned hotels.
On the other end of the island in the historic town of Baracoa, private rentals are available throughout the town. A long-time employee of the town’s only hotel says that they outnumber the hotel’s 34 rooms.

The renters’ prosperity has led to many renovations, he said, leading some to call their sector “Little Miami.” In Ciego de Avila, a provincial capital that is not a tourism hot spot, a cuentapropista who rents a room to tourists says he is one of 43 with a housing rental license. He obtained his license in 2004, with difficulty.

Tired of tussling with inspectors in his former pizza business, he decided to switch to a different line of self-employment. He prodded local housing officials for more than two years for a license to rent his spare room with a private bath and old Russian air conditioner. The main point of contention was the need to demonstrate that his family would not be overcrowded in its remaining space. He understands the Economics 101 concept of “elasticity of
demand;” he charges the low rate of $15-$25 per night that reduces nightly profit and sometimes makes it hard to pay his monthly tax, but he attracts more first-time customers.

A 2005 academic study of Cuba’s tourism industry noted that in addition to Cuba’s 41,000-room hotel capacity, there are 5,000 to 6,000 rooms available for tourists to rent in private homes. Our survey included twelve home rentals. On average, they had been in business three years and nine months and their average profit was $438 per month after paying an average tax of $267. The lowest tax per room rented was $100 in Ciego de Avila, the highest $250 in Havana’s Miramar neighborhood.

Housing rental is a lucrative but challenging line of selfemployment, made more difficult by taxes and regulatory requirements that have grown steeper in recent years. A 2003 law increased taxes by levying tax on common areas used by guests such as hallways, living and dining rooms, and patios, in addition to the per-room tax. A special license is required to offer food service to guests. Proprietors are required to keep a log of guests, their dates of stay, and their passport information, and they must keep records of their revenues.

The main challenge that these cuentapropistas cite is drumming up business, because they must make their monthly tax payment even if their revenues are zero.

Many advertise on the internet, using sites developed and hosted by friends overseas. Many also collaborate in informal referral networks and, following what one calls “the unwritten law of home rental,” they pay commissions to people outside those networks who bring them clients.
A woman who has rented two rooms in Havana since 1997 struggled to establish her business. “At first, no one knew me,” she said. She strived to achieve good quality and thereby establish a good word-of-mouth reputation. Her first big break was to rent to a group of Americans who generated lots of referrals and return business. But “the best thing that ever happened” was when her home was listed in the Lonely Planet tourism guide—a bit of free free publicity that now generates steady business.

Posted by Libertad at 6:29 AM No comments: